As we’re zeroing in on the final days before Christmas, I thought it would be fun to make one of these posts a Christmas Throwback. Going back on the past number of years and showing you all my past Christmas looks, nails, decor et cetera! So let’s throw it back. 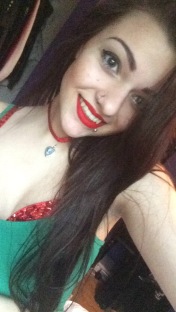 So to start off, I’m starting with last year, 2014. Here’s some looks and things for the holidays that year! 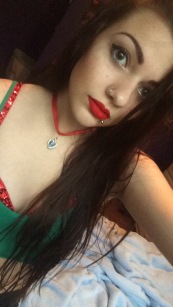 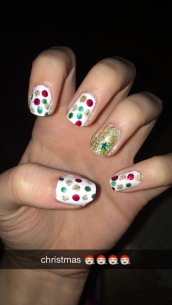 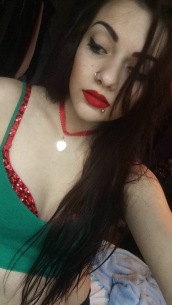 That bra is always perfect for (red colored) holidays. I got it from one of those stores that sells the same clothes and things as so many other stores; it was in an outlet mall, and I’ve seen these bras at a lot of places. I love the festiveness. I actually cut that green tank top because it was really long and I liked it shorter. My stepmom actually made the choker! And finally I think on my lips was Kat Von D’s Outlaw liquid lipstick, and I really like the look on my cheeks, I think it was a mix of blush and bronzer and I think the warmth is just perfect. I did those nails 3 days before Christmas and I’m still obsessed with them, I might do a similar look this year! 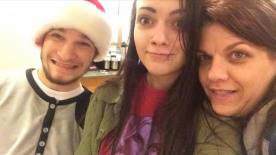 Here’s the pictures from actual Christmas last year. The ones where I was wearing the red Britney shirt with the green button up shirt over it are from Christmas Eve, and the ones of me in my pajamas were from Christmas! I think I looked really silly but I had already worn a cute Christmas outfit a few days before, so that makes up for it. And FYI this Christmas was of which the most I’ve ever weighed, and I think that’s crazy because after yoga and completely changing my diet, I almost weigh as much as I did in 2012 (when I was 14)! And I never even weighed that much to begin with, in any of these years, just pointing out that this is a change for sure. 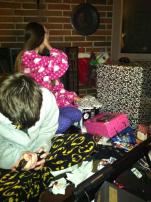 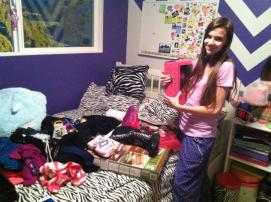 The funny thing is, I can’t find any of the pictures from 2013. I’m not sure why. But here’s 2012, another funny thing being I wore the same pajamas here as I did last year. Lol, I think I got them in 2012 on Christmas Eve, but they’ve always been my favorite so I chose to wear them last year too! Anyway, I also went to see The NutCracker with my mom and our friends that year, although I think my outfit was kind of funny. I’m glad I have better style. And now for all these youngin years:

I also couldn’t find the pictures from 2011, but these 2010 pictures are cute. My brother & I and our cats, in front of the tree. This was a week before Christmas. 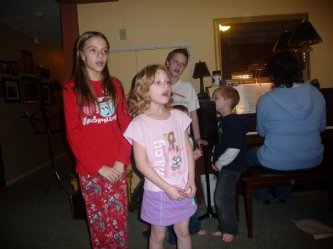 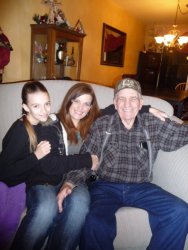 On the top left is a picture of me singing at the Creche, which is full of nativity scenes and food and some people singing, and the girl next to me is Laurel, we sang a duet. On the bottom left was me singing with my cousin Maren in my Christmas Pajamas for that year (I think they’re cute haha) and I’m not really sure why we’re singing (by the way, that Miley shirt she got at the concert she and I went to in 2007!) but that picture and the one on the right were both taken at her house for Christmas Eve. My hair was done cute, I can’t even remember which cousin/aunt did it! 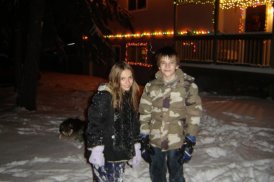 This is really funny. On the far left my brother and I were playing in the snow on Christmas Eve 2008 with our dog Maddy, and it’s a memory I’m really fond of and I haven’t forgotten it at all since that day. In the middle is my brother and I on what I assumed was Christmas Eve, him with a new present (we usually got to pick out one present to open each year on Christmas Eve) and on the far right is finally Christmas 2008, and my enthusiastic present opening. That’s really funny to me, I was 10 there, and I really make myself laugh.

That’s all I have for throwing back, and I hope it wasn’t too boring. Hope you also got a good laugh going down memory lane with me!

Christmas Song of the Day: Winter Wonderland by Selena Gomez & the Scene