Hello hello! I thought I’d start a cool new thing since I’m having a hard time posting on here lately. But basically I’m here to share some cool outfits and things I’ve gotten or worn in the past week. It isn’t all things that I could make entire blog posts out of on their own, so I’m throwing them into this, and this might become a series. Happy Monday Mourning!

Read more to see more pictures and descriptions of my week!

April 10th was so fun! It was a Sunday, and Ally and I decided to go explore Seattle. We live just outside of Seattle so we were basically tourists in our own vicinity and I loved it. I wore chained leggings (maybe from boohoo?), plain black vans, and a hoodie over my new favorite shirt, this Rebel shirt from Abbey Dawn! I also threw on my 4-leaf clover necklace and Kat Von D liquid lipstick. But of course, by the time I got home, Ally and I just sat there and talked and laughed and I put a pair of Pink sweatpants on over my leggings. 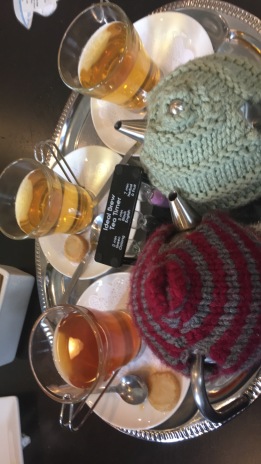 April 11th was pretty boring and there were not really any pictures, but Tuesday, April 12th we drove to Seattle again to drink tea together (My mom, Ally & I) and it was a really cute place! I loved it. I wore a dress & black cardigan, they were both given to me by people. My bow is from etsy, I think it’s just the cutest thing!

On April 13th, 2016 I got a super rare Britney CD that I posted at the beginning of this, but that’s pretty much all that happened that day. On the 14th, I went for a walk with my love (where she took the picture of my hair up there) and then came home and drank tea, because, if it isn’t obvious, I adore tea. And here’s my mom! She told me to take a picture of her “circus” outfit, and I think it’s cool that my mom likes to do fun things with her outfits like me. 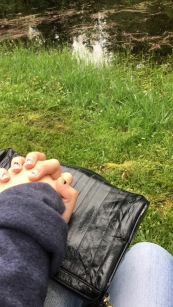 Ally and I at our pond

Friday was great. Ally came over at like 8 AM instead of going to school, and we sat at our pond talking for hours; I love this girl. I also gave her a manicure, haha. Then later in the night, I put on a loose grey top and grey joggers plus my chestnut brown extensions and then I went to go adventure with Ally again!

On April 16th, all I did was hangout with my ball python Brisk, which is why he’s the featured image at the top!

First Outfit of the Day

Chillin’ at the lake with Ally

Yesterday was so awesome!!  I totally loved my outfit, and that outfit is what inspired me to do this post. My leggings are See You Monday brand, shoes are from the gx by Gwen Stefani brand, shirt is from Linkin Park’s 2012 tour, and my extensions (not including the red) are Bellami’s Kylie Kouture! Then I swapped that out for shorts and a My Little Pony tee that I cropped because it was so hot outside. If anyone’s wondering, my nail color there is Essie’s Go Ginza. Definitely in love with it. I hope this post was at all entertaining or cool or informing or something in any way! Thanks for reading!