One thing anyone can probably see about me is that I really like concerts. Last month (August) I posted about my Gwen Stefani Concert Styles and also threw in my Demi Lovato concert outfit; those were the two concerts I attended in August. In September I’ve only seen one person…Sia. I love Sia. My photoshoots have been kind of lacking lately but I really want to get this posted anyway, so here I will present to you my outfit for the concert, Cheap Thrills, and the outfit I created with the shirt I got at the concert, Sia Later.

Cheap Thrills. The name suggests endless fun not funded by a dollar. Honestly that’s what concerts are to me; it costs some money for a ticket but after that it’s a night full of absolute free gold for the taking. A ticket opens the door but you watching an hour opening act and then an hour of your favorite act is something you’ll never forget. Experiences can be a lot more valuable than possessions.

That being said, this outfit was just named after her song. Hahaha, and I think it might be kind of fitting because I’m definitely thrilled by this outfit, which is from some lower-end stores. I love that I could mix this polka dotted skirt with this plaid shirt, for some reason it just went together so perfectly to me. Now let’s get into it. The skirt is from Forever 21 but I actually think I got it 4 years ago. Haha, so maybe this exact one still isn’t selling but this is a very basic skirt and there’s a lot like it at like any store. I paired it with an Abbey Dawn shirt I have that I got from Goodwill a while back but I think it’s from 2010ish, part of the Kohl’s exclusive Abbey Dawn line. The top and the skirt together weren’t valued at too high of a dollar, and I thought it was a perfect match. 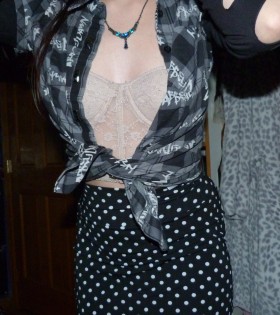 I didn’t accessorize too much with this outfit; other than the skirt and shirt, i added a beige bustier and a blue necklace. Honestly that was about it — but both of those things have no known origin. Another one of those things that the tags were ripped off of long before I got them. So there’s your cheap thrills, if you want a similar look then just know a lot of 2010s fashion was layered shirt illusions like this, haha and a lot of forever 21 is still basic colors and patterns.

Sia Later! We’ve had a few laughs over that name, especially because Ally called in the middle of the shoot. Hah, but per tradition I got a shirt from the Sia concert (it features Maddie Ziegler from The Greatest single artwork), and I was sitting in my room kind of bummed. Because I was trying not to buy many graphic tees these days because wow I have enough to clothe an entire army, but I got my creative juices flowing and somehow popped out an outfit that included a graphic tee yet still looked distinguished from other graphic tee outfits. I had to pair this top with my bootie things from Privileged, the top gold part is detachable but I chose to have it on for this outfit. Galactic.

See my art? Sia later. Thanks for reading, definitely feel free to always throw me out requests or ideas for a posts. Contact me at abby@ishopfordays.com

Song of the Day: Chandeiler by Sia