Fashion is my…favorite thing in the world. My highest passion, my favorite thing to do, my favorite thing to think about (other than Ally), etc…Sometimes I think people forget that. They see me prancing around in my photoshoots and assume I’m some wannabe model, or even a wannabe blogger. But it’s more than that…my FAVORITE thing is to blog about my fashion, but that’s because the fashion itself is so exciting.

I think people have the wrong idea about celebrities and all of that. They are people, yes. But if you’re sitting here talking about Demi Lovato, you’re basically using that name to refer to the public figure. Publicists, media, etc create a person into a beautiful icon. Some celebrities are more candid than others, but that’s a choice. So when you talk about Demi Lovato, all you’re saying is what you know from press and other people you’ve heard. You’re talking about “Demi Lovato”, not Demetria. You don’t know her. No amount of obsessing over a celebrity will have you actually know them, and people need to remember that they can talk shit about Demi or whatever because who cares? It’s just a name and a facade. There’s nothing wrong with that though, that’s just how celebrities work. I’ve met Demi Lovato and I know I still don’t actually know her, so I can say all I want about her, but that doesn’t affect her as a person because I don’t know her as a person so all I can do is respect the name and face of her artistry.

Hmm… on a really random note, I’ve had this Christina Aguilera song stuck in my head kind of on a loop. The lyrics “If I wanna wear lingerie outside of my clothes … if I want to be provocative well that ain’t a sin, maybe you’re not comfortable in your own skin,” the song is called Still Dirrty and it’s awesome. But like…You know how a big trend right now is wearing lingerie as “clothes”? Tbh lingerie IS clothing so I don’t know why it has to be a big deal for people to wear it like that but people used to constantly treat it like it was a secret. Heck no! Bodysuits are one of the coolest trends, and some of them are made for normal wear and some are versatile, but either way I love them all and I want more! So go Xtina for wearing lingerie outside of your clothes because I’m going to buy a bralette from For Love & Lemons and a bra set from Agent Provocateur (someday) and I’ll rock it. Let’s reminisce on some lingerie-esque outfits.

I’m proud of myself, like a lot of girls my age (18) really haven’t discovered the vitality of confidence, or maybe it’s just really hard for them to be secure. It is for me too! But I recognize that it’s hard and sometimes when my clothes are more “revealing” I get hella insecure but honestly I love fashion so much and I really shouldn’t let other people get in the way of me doing whatever the hell I want with it. It’s not just for me but this is myself proving to everyone that I can break past the wall of stigmatization.

So yeah this whole blog post is a bunch of super completely random stuff but I think about this stuff all the time and I wanted you guys to get inside my head for a second, because maybe it’s amusing? Or fascinating? Or informative? Who knows!

But, sigh, there’s this outfit I really want from Nasty Gal but I also wanna buy a new curling iron and curl my hair with the outfit. It’ll be so super cool. Plus, more liquid matte lipsticks for days!

A year ago today I was knee deep in CD collecting again! I was at around 320 CDs at the time and now I have 450, and I haven’t even been focusing on them at all and I forgot they existed but a year ago today I got a giant package of 5 Lady Gaga CDs and a couple other artists. So cool! Maybe I should collect more again. But lol check this out! #AYearAgoToday. Yep these were all the CDs that I got in ONE day. Now I get like…2-3 CDs a month just to download the music. I still love my collection though. 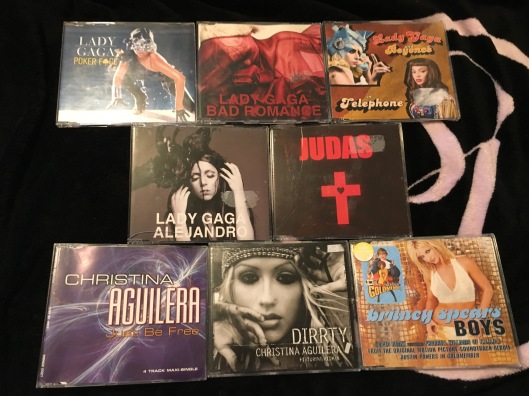 Sigh. Cool stuff. I have like nothing to shoot and I’ve been lacking inspiration but maybe I can make something up soon!! Ideas??

It’s not you, it’s Bea Miller. Part One (2018). Downtown Seattle. Full post on my blog (; #itsnotuitsme #beamiller #shopfordays #partone #beamillerproject
Welcome to my dark side. Find “Flights of Fancy” in the link in my bio now. Been updating my site a lot and this is kind of a spewed poetry slam of a night but read all about it. I’m posting a lot more frequently now too 😇 So lots of new stuff coming! #darkside #bloggerlife #lifestyle #girlgang #badbitch #jailbroken #marcjacobs #smokyquartz #outside #photoshoot #bishopbriggs #marlboro27
SNOWBLIND. A cute outfit + 4 weeks of sobriety from drugs. Good things to celebrate. I made this one count. Check it out, find Snowblind with the link in my bio. #snowblind #au5 #tashabaxter #stripedsweater #snow #coke #4weeks #sobriety #hairgrowth #hairsupplements #britneyspears #circustour #amethyst #styleblogger #fashionblog #blogger #bloggerlife #fashioninfluencer #writer #musicandfashion #merchstyle #merchfordaysbritney
See wayyyy more (of this 78 picture photoshoot) on my blog, link in bio :) Sorry Not Sorry! #TellMeYouLoveDemi #demilovato #sorrynotsorry #styleblogger #fashionstyle #sequindress #glam #blogglam #tooglamtogiveadamn #sequins #newyearseve #newyearsday #partydress #kyliecosmetics #kingk #blogosphere #wordpress
Sorry Not Sorry at a teasing glance. It’s a photoshoot I did for my last blog post of 2017! A resolution is for me to get back into promoting my blog in any way I can, because I have some BIG ideas I’m excited to have come to fruition! Sorry Not Sorry is an unapologetic, sequin/chain dress simple ass glam shoot inspired by the song/lyrics of Sorry Not Sorry by Demi Lovato, from my second favorite album of 2017. Link in bio to see the post! #TellMeYouLoveDemi #demilovato #sorrynotsorry #styleblogger #fashionstyle #sequindress #glam #blogglam #tooglamtogiveadamn #sequins #newyearseve #newyearsday #partydress #kyliecosmetics #kingk #blogosphere #wordpress
New post on the blog, Doin' What I Wanna Do. This is a fun glam shoot inspired by the song Bacon by Nick Jonas (; #ShopForDays #nastygal #dress #fashioninspiration #styleblogger #blog #lbd #fashion #fashionblogger #blogger #photoshoot #doll #outfit #inspo #kyliecosmetics #fashionista #seattle #inspire #liquidlipstick #style #glam #urbanglam #love #littleblackdress #summer #sandals #heels #fauxfur