The very first time I saw this trend, Kylie Jenner was rocking it. I’ll include that picture. Anyway, at first I thought it was really dumb. Then I realized it was kind of cool…Like wildfire that trend did spread, being interpreted by a million different people in infinite ways. It wasn’t until now, 4 months later, finally got my chance to fw this trend! I got a big bag of used clothing and had my mind set on re-creating this trend in my own way, so I started snip snip snipping away. Got some really controversial results, but the main one is one I call Epic.

This sweatshirt originally said “Epic Weekend” in all of this middle school font, and at first I tossed this sweatshirt aside because I thought it was funny and couldn’t take it seriously. Then I’m like “I wonder…” and cut right below the Epic part, and I wasn’t even trying to find something for the trend at this time I just discovered it by total accident. I think it’s super cute and I wore it over this black tanktop and created such an abby-versin of this trend, and I LOVED it. So after that I cut two more shirts, and I’ll show you those at the end. THE LOOK – 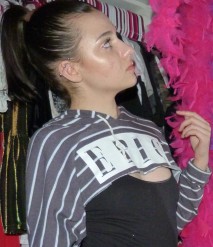 Alright so a couple days after my Epic battle I decided to take this style to the next step. I cut this black shirt really small, and expected it to be like mid-boob length, but it definitely was a lot shorter than that. Lol, so I threw on some pasties that say Bad Girl, drank a smoothie and danced to Kesha on my story. This legit happened and it was great.

My eyebrows were so bad when I tried Anastasia’s dipbrow, I def did not do a good job. Lol. Spaceship necklace is from Kesha’s Rainbow album, pants are from Pink Ice, boots are from Nasty Gal and lipstick is Outlaw by Kat Von D (outlined by Cheerleader liner from Huda Beauty) 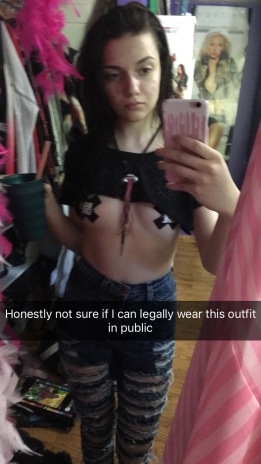 This is supposed to be a joke btw

And then the day after that I was so hyped, I was ready to create a new look – then I saw this edit of some celebs and took a comfy tee and cut it to barely- legal stature. It was originally a Teen Titans shirt. 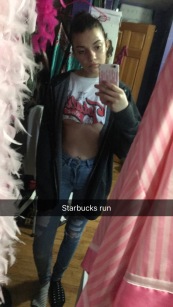 Jeans are by Guess, sweatshirt is from Britney Spears’ 2011 tour, and phone case is by the Kylie Shop. I love these kinds of high ponies. Oh yeah and again that spaceship is Kesha merch!

And so there you have it…How to rock the boobcut trend in 3 ways. By the way I didn’t contour my chest in ANY of these outfits and honestly I really should’ve lol, it was just a boob trend that I didn’t wanna mess up by overcontouring my boobs! 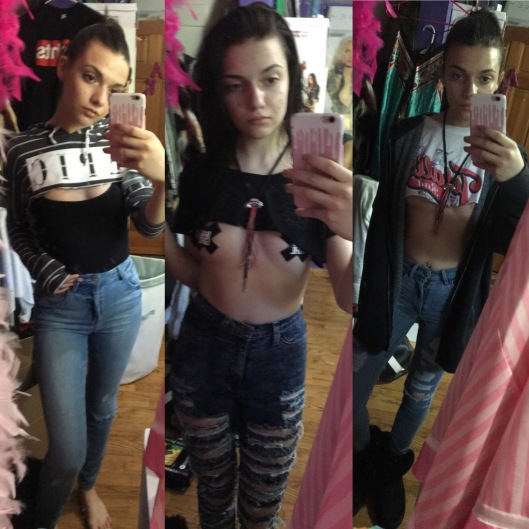 Song of the Styles: Boogie Feet by Kesha